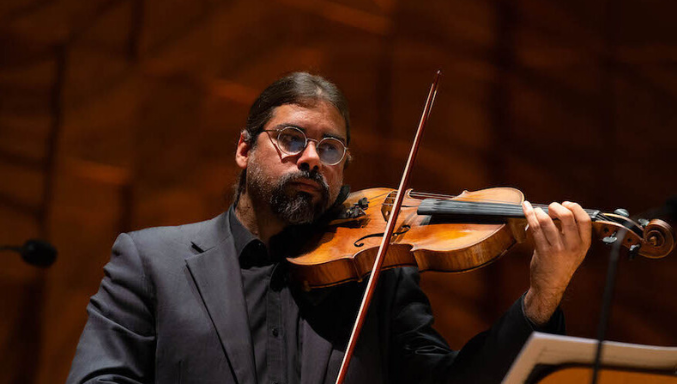 Aaron Wyatt is a multifaceted musician; a violist, programmer, composer and conductor, recognised as the first Australian First Nations person to conduct one of the major Symphony Orchestras in Australia. He is the director of Ensemble Dhutala, a group founded by Yorta Yorta soprano and composer Deborah Cheetham AO to bring together Indigenous classical musicians from around the country, and a core member of the award-winning Decibel New Music ensemble. Aaron is also the developer behind the Decibel ScorePlayer app, the ensemble’s cutting edge, animated graphic notation software for the iPad.

Aaron’s Sounds Unheard Studio Talk series, “Playing Music Online”, takes a look at his innovative work in programming, telematic music and how internet technologies can be used in music performance.

In the third episode of this series, “Digital Echoes”, Aaron discusses how he plans to use the Decibel ScorePlayer and JackTrip in the creation of his new work for Speak Percussion. Aaron introduces us to two of his works that use the ScorePlayer – his contribution to Decibel’s ‘Two Minutes from Home’ project and Ensemble Dutala’s ‘Our Place’ – and touches on some of the new modes and features he plans to code into the app for his new work. Aaron also explains how JackTrip will be used in his piece to create an “internet reverb”, using latency, echo and spatialised sound to explore the intersection between live performance and technology.

Thank you for joining us for the third episode of Aaron’s Studio Talks series. For more information on Aaron’s work with JackTrip and the Decibel ScorePlayer app, visit https://www.psi-borg.org/.